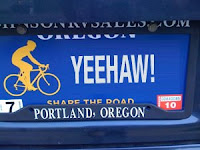 I should have known the day would be wacky when we walked out to the car to head to school and found 4 of Keizer’s Finest patrol cars screeching to a halt to snag a bad-guy-on-foot down at the end of our street. Course, nothing says “I’m Local” like standing there in my jammies, coffee cup in hand, baseball cap covering my Bob Wiley hair, watching the action.

After getting back from playing Mr. Mom Taxi Driver (two movies that should never really be referenced together) I put on our new Share The Road plates that have needed to find their way onto the Honda. Since the Mrs was headed out of town, and I’m pretty sure the temp plate expired, I figured it was a good day to get it done. I’m pretty pumped to see the little cyclist fella on the car, and it’s especially ironic since our eldest is learning to drive on this car…but won’t set any part of her body remotely near a bike. One bad experience on a dusty trail in LaGrande, and that was the end of the interest in bikes. Sigh.

After lunch I spent some time at South Salem Cycleworks checking into the stuff I’d need for the overhaul of the 20th Anniversary Torelli I’ve been pouring over in the previous couple posts. After settling on a direction, I headed back to the office, with a quick drive through pit-stop for an iced skinny latte to help get through the afternoon. So far, so good.

Shortly after getting back, we heard the sound of police sirens, and before long we had a whole gang of our office team on the sidewalk that borders our office property looking at this scene: 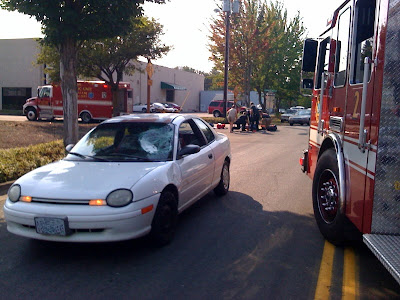 For those of you familiar with Salem, that’s Commercial Street in the background, heading into downtown, just before Applebees. That Neon is parked on Tryon, a little side street that runs alongside our parking lot. Note the smashed windshield, dent in the drivers side fender, and missing hubcap on the front wheel. According to the StatesmanJoural, that’s what happened with the driver ran the stop sign at the cross street, and the cyclist you see laying on the ground in the photo ran into her while riding down Commercial. And since the question will come up, no, he wasn’t wearing a helmet.

We didn’t see the accident, just the aftermath. The cyclist was coherent, and obviously in a lot of pain from his loud groans and screams. I’m happy to read that he appears to be ok, aside from a possible broken leg. His bike was rested up against the stop sign, and the rear wheel was toasted, but hopefully that will all be covered under insurance.

That’s the second accident ‘in the hood’ in this past week. My personal feeling is that Salem is nowhere near a bike friendly town like Portland or other larger areas where more bikes are present, and I often feel like I am taking a little bit of my life into my hands when I ride around here in traffic. Seeing this one today reminded me that as a recreational cyclist who also spends a great deal of time behind the wheel of a car, that I need to be extra careful every time I head out on the road. Please do the same when you head out…..remember, I’m often out there on two wheels and no airbags to protect me!

To those who would ask about the helmet they are not made to withstand car accidents. I used to commute 10 miles each way when I lived in south Salem and only had two accidents involving cars, both at low speeds, and both were partly my fault. So although I’d say it wasn’t always safe, I never felt less safe then when in a car. I’ve never thought of Salem as bicycle unfriendly (although the honks from teenagers trying to scare me are annoying) Also not sure I want Salem to be like Portland. Cyclists there aren’t known for being friendly or respectful of others.

Perhaps I should say “bike aware” instead of “bike friendly” — less bikes means less awareness. I’ve spent a ton of time in Portland this past summer, and people are definitely more aware of of those on two wheels around them. And sure, there’s always someone running a red light, or suddenly becoming a pedestrian when it’s convenient…always a few in the mix giving everyone a bad name.

I like Salem being Salem, I just want people to be more aware of those around them.

Ok I get that. Just here so many hardcore cyclists meaning it in the sense that cars = bad and bikes = good. Sorry for jumping to that end so fast 😛

Just for clarification; was it Bob Wiley-hair or Flock of Seagulls-hair? (either one being worthy of a cover-up!)